Watching all the movies on the Warner Bros. 50-movie box set that I bought for cheap. This week the random number generator just wants to go to Piggly Wiggly as it selects Driving Miss Daisy.

Here’s what happens: It’s 1948. Miss Daisy is getting too old to drive, so her son hires her a chauffeur, Hoke. It doesn’t go well at first, but this mismatched pair becomes unlikely friends as the years go by.

Why it’s famous: All the banter between Morgan Freeman as Hoke, in the driver’s seat, and Jessica Tandy as Miss Daisy, seated behind him as the ultimate backseat driver. 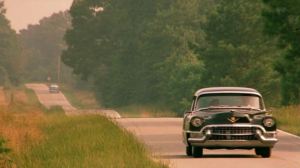 Get your film degree: Can we talk about the score? Just when the movie starts to get too dramatic or tearjerky, along comes Hans Zimmer’s upbeat and peppy music, helping the movie maintain a lighter, breezier tone. 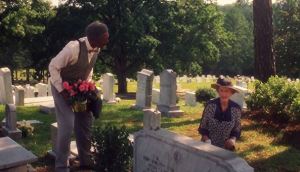 Movie geekishness: While Driving Miss Daisy got tons of Oscar nominations, director Bruce Beresford wasn’t nominated. So just who is this Beresford guy? A native of Australia, most of his career has been in Australian film and TV. After he caught Hollywood’s attention with his big Aussie hit Breaker Morant, he became something of a journeyman director, helming Tender Mercies, Crimes of the Heart, Her Alibi, and Double Jeopardy. In 2007, he published his memoir, hilariously titled Josh Hartnett Definitely Wants To Do This. These days, Beresford mostly directs live opera (!) but IMDb says he has a new movie currently in pre-production.

Thoughts upon this viewing: I looked it up, and a lot of people hate Driving Miss Daisy. Some think it’s old folks’ movie, while others feel its “message” is too heavy-handed. Not me, though. The movie is so gentle, well-meaning, and just so gosh-darned nice that it wins me over.

Next week: Spielberg is the word.