Fantastic Friday: Are you not entertained?

The FF, Iron Man, and Thor have journeyed into the distant future, where Galactus is using an astronomically huge device with a black hole at its center, for the purpose of devouring not just planets, but the entire universe. The villain Kang keeps showing up, and Johnny is being mentally manipulated by a mysterious blue-skinned woman. As the heroes’ time sled is sucked into the black hole’s orbit, there are two pages of all black panels with only word balloons. Reed concocts a way to combine the power of the sled, Iron Man’s armor, and Thor’s hammer to escape the black hole’s pull.

Once outside the black hole, Johnny continues to act out of character. Here it’s finally revealed that Johnny is not Johnny. The blue-skinned woman has taken over his brain, and is choosing her words carefully so others don’t get suspicious. The discuss how they can possibly destroy Galactus’ device, and Sharon somewhat randomly suggests contacting the Shi’ar Empire, saying that the Shi’ar might have the firepower they need. Everyone’s okay with this, and Thor uses his teleporting power (which he has now) to take them to the Shi’ar.

The heroes find themselves surrounded by battleships in orbit around the Shi’ar planet. Because of the time dilation (or something) it appears that the whole planet is frozen in time. The FF and co. visit a weapons manufacturing plant and just help themselves to what they need.

On the planet, we see Gladiator, the Superman-like head of the Shi’ar’s Imperial Guard, taking notice of the disappearing equipment, he breaks through to the heroes’ time dilation and immediately picks a fight with Thor. (There’s no mention of time travel in this part, so I guess Gladiator doesn’t age, and this is him in the distant future.) Thor and Gladiator are evenly matched, with Thor getting knocked around by Gladiator, and Gladiator being one of the few characters able to survive getting smacked in the face by Thor’s hammer. Sharon breaks up the fight, reminding the two that they’re fighting around dangerous weaponry.

Thanks to Reed’s universal translator, Gladiator remembers that these are the good guys. He reveals that he is currently acting as regent of the Shi’ar, in place of the empire’s child emperor, Charles I. Gladiator orders the entire Shi’ar fleet to attack the Galactus device, even at the risk of leaving the Shi’ar homeworld defenseless. The fleet attacks Galactus, and Reed is in awe of the spectacle. The battle is felt all the way back in the present, where we revisit the mountain of the Dreaming Celestial (from back in issue #323) where the Dreaming Celestial, a robot who is so big he makes the mountains look all tiny, finally awakes and now walks the Earth. 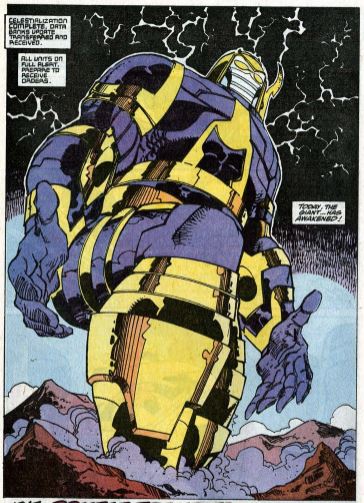 Unstable molecule: Sue at one point asks Reed if he regrets saving Galactus’ life back in issue #244. Reed says saving a life, any life, will be his first priority. He is, however, not ruling out killing Galactus this time, if that’s what it takes to save the entire universe.

Fade out: Sue once again contributes almost nothing to this storyline. Reed asks her to keep an eye on Johnny, what with Johnny acting suspicious.

Clobberin’ time: Reed is about to give up when the team is drawn toward the black hole, but Ben is the one who talks him out of it. He calls Reed a disappointment, doing the ol’ reverse psychology bit. This is a small but interesting character turn for Ben, feeling like the result of all the times people told him, “but you’re not a monster.”

Flame on: With his mind possessed by the mystery woman, “Johnny” has several thoughts about Gladiator being handsome, and even a possible future consort. Have a lot of people taken these panels out of context for humorous purposes over the years? Yes, they have. 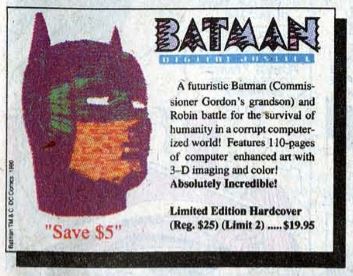 Trivia time: According to the Marvel wiki, the Shi’ar homeworld is a planet named Chandilar. However, the wiki insists that Chandilar’s one and only appearance was in Uncanny X-Men #275, which was published a year after this issue. Either the Shi’ar get a new homeworld in the future, or the wiki need updating.

Fantastic or frightful? The massive scale and outpouring of sci-fi creativity from Walt Simonson make this issue a lot of fun. Some have criticized this arc for being all spectacle with little character development. That might be true, but spectacle is what Simonson does best, so I say go big.