Fantastic Friday: It had to happen sometime

Reading the Fantastic Four comics from the start. In issue #407, Reed Richards comes back from the dead. It had to happen sometime.

Previously, our heroes encountered the godlike villain Hyperstorm, who has Dr. Doom held captive in his otherworldly tower and seemingly killed the FF in the same way that Reed was killed way back in issue #381. Surprise! The Fantastic Four aren’t dead. When Hyperstorm zapped them, he didn’t kill them, but teleported them somewhere. The FF — in this case Sue, Ben and Kristoff, with guest stars Lyja and Namor the Sub-Mariner — are in a rocky, desert-like landscape, where they are immediately attacked by “hill pirates.” Namor knows these guys from somewhere, apparently. Our heroes easily defeat the pirates, while Sue speculates that Hyperstorm has sent them to a world where Reed is still alive. Namor spots an alien city in the distance, and they head for it.

Back in Hypsertorm’s tower, which is in another universe, Hyperstorm gloats to Nathaniel Richards, whom he’s taken captive. Hyperstorm says his goal is nothing short of the conquest of all time and space. When Hyperstorm leaves the room, Nathaniel asks Zarrko the Tomorrow Man about him. Zarrko says Hyperstorm saved him from being trapped in the timestream. (This happened after his conflict with aliens called Time-Twisters in Thor #245.) Zarrko also believes that he is not Hyperstorm’s sidekick, but his “business partner.”

The FF arrive at the alien city, which is straight out of Conan the Barbarian, with sword-swingin’ savages and scantily-clad dancing girls. Using the treasure Kristoff swiped from the hill pirates, the FF don disguises and question some locals at a tavern about any strangers in town. One guy, Taylos the Trader, says there’s a mad hermit who lives outside the city. The pirates show up again, and pick another fight.

In Hyperstorm’s tower, Zarrko checks in on the prisoner Dr. Doom, not knowing Doom had his intellect restored last issue. Doom does his telepathic mind-switch thing he’s done a few times in the past, and possesses Zarrko’s body, swearing his revenge. In the other world, the city guard show up at the tavern, so the FF make a run for it. They buy a horse-drawn wagon using their stolen pirate gold and out of the city. Then it’s back to New York, where Johnny has decided to pay a visit, taking a break from leading the Fantastic Force spinoff team. Ant-Man fills him in on where the team has gone, and Johnny flies off, hoping to join them.

The FF arrive at the hermit’s cave, only to find a crazy-looking device outside, which Namor identifies as a hydroelectric generator, far beyond the technical level of anyone on this world. Before we all congratulate Namor for being smart, he then steps over a wire, tripping a homemade alarm. Turn the page, and there’s good old Reed, looking all bearded and disheveled. 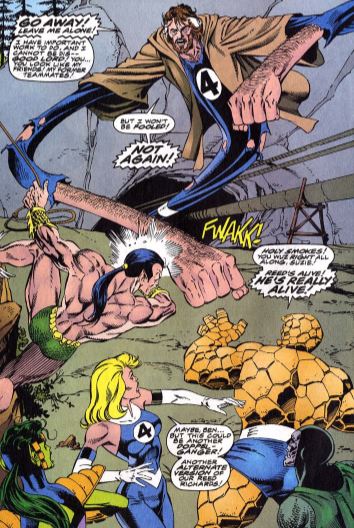 A fight breaks out, as the FF fears this might not be the real Reed, and Reed doesn’t believe for a second that this is the real FF. Sue approaches Reed, admitting that they’ve both changed since they’ve been apart. They talk for some time, with the reader not privy to the conversation. The finally conclude that it’s really them, and they fall into an embrace.

The next step is to discuss how to get home. Reed says Hyperstorm stranded him in this technologically backwards world because it would years to develop circuitry needed for a time machine/teleporter. Kristoff offers the circuitry inside his armor, which has just the parts Reed needs. Then, in Hyperstorm’s tower, Dr. Doom is still possessing Zarrko, freeing Nathaniel Richards from stasis. Nathaniel wants to get out of there, but Doom says they must work together to defeat Hyperstorm. They say all this with Hyperstorm secretly watching them on a monitor.

Unstable molecule: Reed believes Hyperstorm has created duplicates of the FF to torment him. Could this be foreshadowing to Hyperstorm’s origin?

Fade out: Sue refers to Namor as handsome early on, but then forgets him once Reed is back in the picture. We get one panel of Namor staring coldly at the two of them, which resolves (for now) his pursuit of Sue.

Clobberin’ time: Ben points out that, counting Sue’s force fields, each member of this issue’s team has super-strength. He tells everyone to remember that he’s supposed to be muscle of the group.

Flame on: Johnny cites Vibraxus’ court case and Huntara’s departure as the reasons why he’s taking a break from Fantastic Force. Funny how he doesn’t mention Devlor giving birth to himself.

Fantastic fifth wheel: If Hyperstorm is so all-powerful, why didn’t he know that Kristoff’s armor could get Reed home? Also, we see Kristoff walking around in his Dr. Doom armor but without the helmet, for a little-kid’s-head-on-a-grownup-body look, and it’s just as silly as you’d think.

Ant-Man only appears in one panel, cooking dinner for his daughter Cassie. I can’t tell what video game Cassie is playing, but it looks a lot like the ships from classic Battlestar Galactica.

The Alicia problem: This issue wants to hint at a possible romance between Lyja and Ben, despite all of the previous issues of her saying she still wants to be with Johnny. Ben comments about she and him are both “free agents” and Lyja tells him she knows how she feels after they see Reed and Sue reunited.

Commercial break: This ad really demands a lot from the reader:

Trivia time: This issue crosses over with the sporadically-published Fantastic Four Unlimited miniseries. Issue #12 of that series follows The FF and Reed as the hermit squaring off against a sorcerer named Artabazus who wants to steal Reed’s tech. Artabazus ends being teleported to Salem during the witch trials, and you can guess where it goes from there. Also, I’m not covering Fantastic Four Unlimited on this blog on account of it’s not very good.

Fantastic or frightful? After being absent for almost two years of real-world time, there was probably no way to bring Reed back that wouldn’t be underwhelming, so having him exiled to another dimension seems as good a resurrection as any.

Next: The power of destruction.