Fantastic Friday: The power of destruction

Reading the Fantastic Four comics from the start. In issue #408, our heroes confront the mega-villain Hyperstorm, and Hyperstorm shows us just how dull he is. 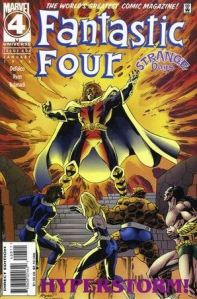 We begin with Kristoff having transported the FF away from Hyperstorm, revealing that they are currently in the distant future, where Hyperstorm rules the Earth, and this is the location of the village of robots that look human from a few issues back. Reed is freaking out, saying the FF don’t have the strength to confront the all-powerful Hyperstorm. Reed asks to go to Four Freedoms Plaza, but Kristoff insists on staying, saying that they must free Dr. Doom from Hyperstorm’s tower, now revealed to be looming over the village. Inside the tower, Hyperstorm orders all his henchmen to evacuate, saying he will send a full squad of Destructoids after the FF. 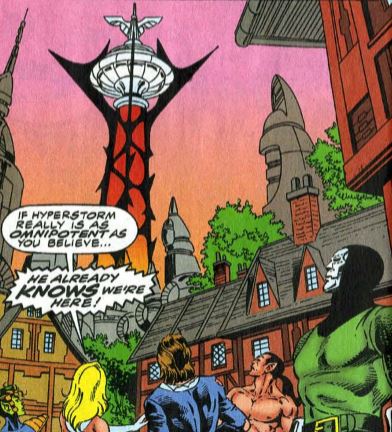 Elsewhere in the tower, Nathaniel Richards and Zarrko the Tomorrow Man fight their way through the henchmen, hoping to escape. What Nathaniel doesn’t know is that Dr. Doom has taken over Zarrko’s mind. Back on Earth, Johnny insists that Ant-Man fire up the teleporter/time machine so that he may join his teammates, even though he formally left the time by this time to lead the spinoff Fantastic Force team.

In the village, the team hears something approaching, so Sue takes charge, ordering Namor and Lyja to the skies and having Ben and Kristoff spread out, ready to fight. Reed tells Sue she’s doing a fine job as team leader, but is obviously sad. Ben reflects on how much Reed has missed since he’d been away. The heroes are attacked by the Destructoids, who are big silvery robots. Reed says he’s heard rumors of these guys, and that they are supposedly unstoppable. There’s a fight, and the Destructoids seem able to take on anything the FF can handle. During the battle, Kristoff runs off, thinking to himself that his responsibility to Dr. Doom supersedes his loyalty to the FF. 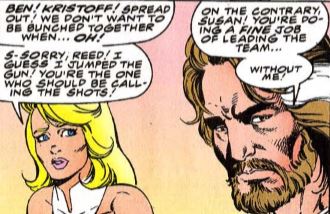 Nathaniel and Dr.-Doom-in-Zarrko’s-body watch the fight from inside the tower. Doom asks why Nathaniel never tried to rescue Reed, if he knew all along that Reed was Hyperstorm’s prisoner. Nathaniel says he never had enough power to defy Hyperstorm, but now he has no choice. Nathaniel marches off to help Reed, while Doom stays behind. 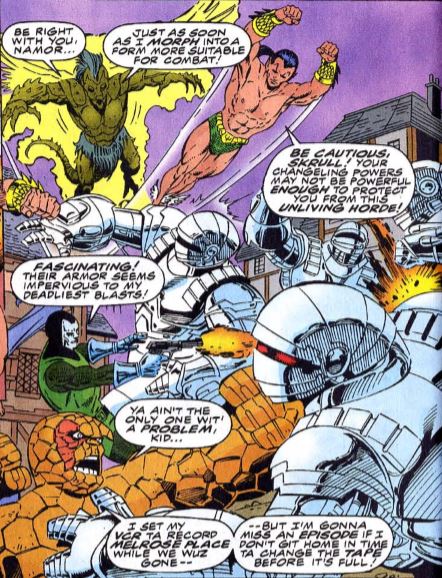 Johnny and Nathaniel both join the fight, and Nathaniel encourages Sue to defeat the Destructoids with the same method she used to fight the Celestial in issue #400. It works, and Reed is in awe of how much she has grown. Hyperstorm then shows up in person, hitting Sue with a bolt of energy. Reed loses it and attacks Hyperstorm. Hyperstorm says he could obliterate them all with a thought, but he doesn’t because he has his reasons. In the tower, Kristoff finds Zarkko unconscious and Dr. Doom freed, his mind now back in his own body. He swears revenge on Hyperstorm. Back in the village, Hyperstorm explains that his powers come from hyperspace, which he describes as a combination of electromagnetism, nuclear power, and gravitational force. He calls this the Power Supreme, and says the FF’s survival or death is on his whim. Dr. Doom and Kristoff, meanwhile, help themselves to Hyperstorm’s science lab, building a new version of the device he once used to steal the Silver Surfer’s powers. He plans to use this on Hyperstorm. 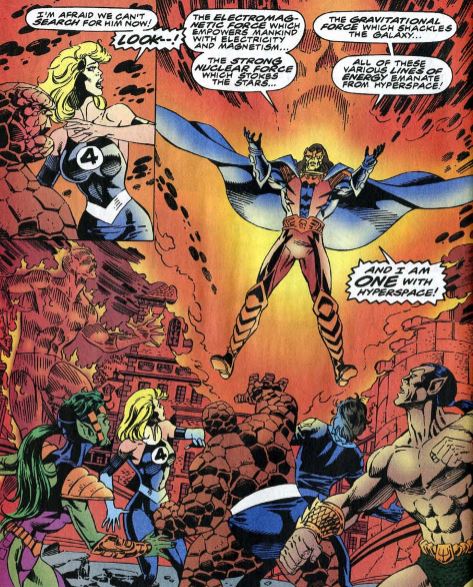 Unstable molecule: Reed goes through quite an arc in this issue. He’s first defeated, saying nothing can stop Hyperstorm. After Hyperstorm attacks Sue, however, Reed fights him, and then wants to get back to the lab to whip up a weapon to take him out once and for all.

Fade out: Sue actually smiles when showing off her stronger powers and pro leadership skills in front of Reed. He encourages her, but is still a little bummed about it.

Clobberin’ time: Ben jokes about wanting to get home in time to see Melrose Place. So much for his only watching John Wayne movies.

Flame on: Ant-Man tells Johnny the FF tried to contact him before they took off, but he away on his mission. This mission would appear to the Fantastic Force’s battle against the Vibravore in Wakanda in Fantastic Force #15.

Fantastic fifth wheel: While Ant-Man holds down the fort on Earth, his daughter Cassie is star-struck by meeting Johnny.

After several issues of the characters wondering if Kristoff would betray them, he appears to do so in this issue. His part in this story still isn’t done, though.

The Alicia problem: Fighting alongside Namor, Lyja ponders how she wishes she had his discipline, and that she is still hung up on Johnny. 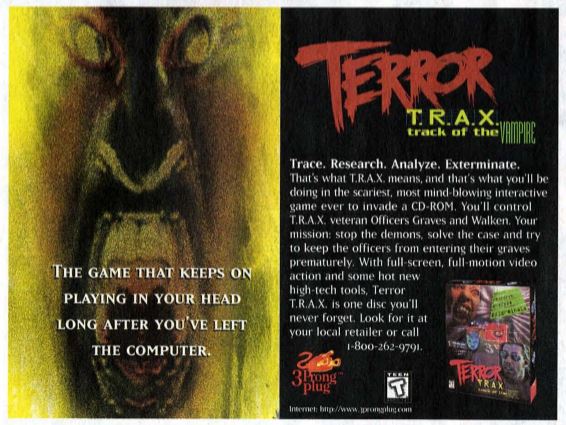 Trivia time: I’m guessing the Destructoids never appeared again, seeing as how the Marvel Wiki has no entry for them. Not only that, but the fan-made sites Marvel Wikia and Marvunapp.com have no entries on them, either. There was a robot called the Destructoid that was used for combat training by the Nova villain Diamondhead. There were also some Kree robots called Destructoids that were seen destroying a planet in an issue of Silver Surfer, and they later cameo’d in one part of the Reign of Kings crossover.

Fantastic or frightful? It’s all about Hyperstorm, and Hyperstorm has the most generic personality. Dr. Doom in this issue speaks in his classic pompous Doom-speak, which is a cut above Hyperstorm’s tired “look how powerful I am” talk.

Next: The final (not final) battle. 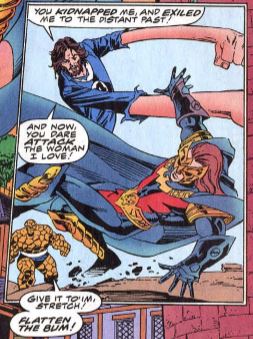