Fantastic Friday: Ronan on the roam

Reading the Fantastic Four comics from the start. Vol 3 issue #13 brings back Ronan the Accuser. But, sadly, it doesn’t end in a dance-off. 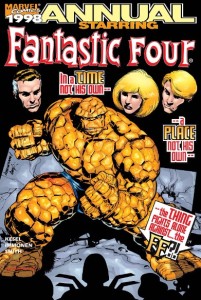 First a quick look at Fantastic Four annual 1998. Ben travels into an alternate universe, with the gimmick being what if the characters had aged in real time since 1961? Reed and Sue are retired, Johnny and Crystal are married with a son named Cosmic Ray and a daughter named Spike. Also, an adult Franklin is married to a Wakandan princess named Zawadi. This new team fights the Wizard, and then Reed helps Ben get back to his own universe. Funny how this and Fantastic Five came out at the same time, with both of them having a similar premise. Also this same month was the first issue of DC’s Superman/Batman: Generations, which also did the real-time-aging stunt, courtesy of former FF artist John Byrne.

Onto issue #13, we’re back in continuity with the good ol’ Marvel Universe. We begin with the FF sitting around the breakfast table chatting, only to be interrupted by Ronan the Accuser, who comes crashing down through the ceiling. A convenient opening text page explains Ronan, saying the Kree Empire has given him authority to enforce the empire’s will anywhere he goes – including Earth. They fight for several pages with Ronan’s hammer, called “the Universal Weapon” has a superpower to counteract each of the FF’s powers. 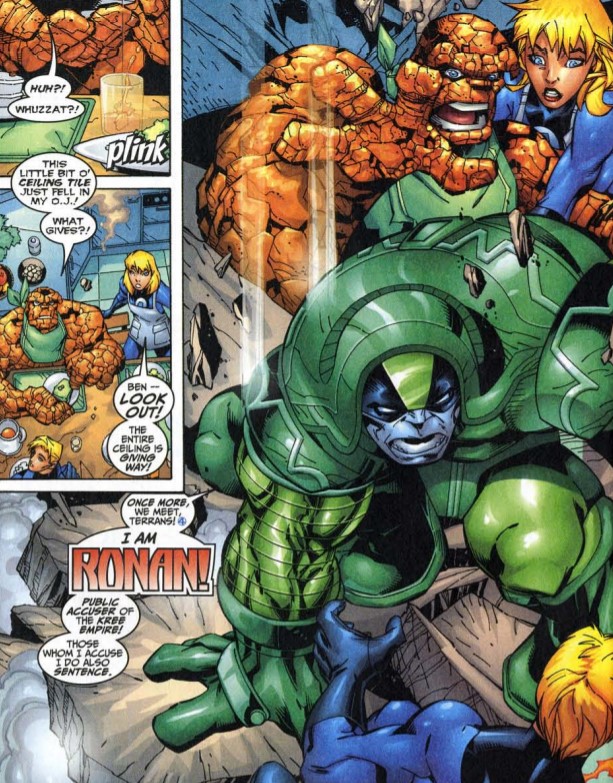 Just as Ronan proclaims victory, we turn the page to see the caption “End training simulation.” Ronan muses that the first time he fought the Fantastic Four, it was the first time he’d ever been defeated in battle. Then he says the Kree never accept defeat.

Back in NYC, the FF’s sexy new mail carrier Whilhemina “Billie” Lumpkin arrives with mail. She sees a strange woman on the roof of Pier 4, but that’s just interdimensional swordswoman Caledonia (a.k.a. Alysande Stuart) who’s currently staying at the pier. She and Johnny share a coffee, and she says she had a troubling dream the night before. Over breakfast, Franklin also had a bad dream, and it turns out everyone had a dream about Ronan attacking the FF. Johnny tells Caledonia that Ronan originally came to Earth to punish the FF for destroying a Kree sentry, and the FF sent him packing.

Later, Johnny and Caledonia have a practice sparring session in front of some students from NYC’s Stuyvesant High School, which is next door to Pier 4. The school’s vice principal later calls Reed to complain about the two of them making a disturbance. Sue, meanwhile, has been investigating the mysterious dreams. She tries accessing the Avengers archives, but she lost her login status after the FF were believed dead during Heroes Reborn. Ben takes over, contacting Firestar at Avengers HQ. Firestar says she wants to give them info on Ronan, but there’s a security block on the FF’s files. Then the Vision joins the call, saying that both the US government and the United Nations have forbidden the FF from accessing Avengers data. Vision then terminates the call. 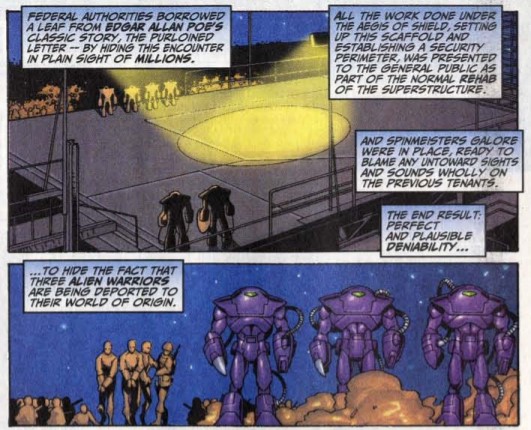 That’s when Johnny chimes in, saying he’s done some investigating of his own. He says there’s been strange activity around Cape Canaveral, and that a moon base is being constructed near the Blue Area of the moon, which contains breathable air, and is the home of the Watcher. And of course Reed has been investigating too, saying that he’s detected a Kree energy signature coming from the FF”s former headquarters at Four Freedoms Plaza.

Cut to the Plaza, still abandoned from when the Thunderbolts left it, where S.H.I.E.L.D. agents have secretly constructed a teleportation platform, to send three Kree prisoners back to their homeworld. (This is a follow-up to the recent Live Kree or Die crossover, in which the Avengers stopped a full-blown Kree invasion.) The teleportation device activates and Ronan steps out. He says he’s here to pass judgment.

The FF are quick to arrive on the scene, and everybody fights for real this time. S.H.I.E.L.D. agents in mech suits join the fight, except they attack the FF instead of Ronan, saying the FF are interfering with federal officers. Ronan takes out the S.H.I.E.L.D. agents, and then knocks out Sue and Johnny. He threatens to kill them, so Reed and Ben surrender. Ronan then teleports Four Freedoms Plaza to the blue area of the moon, saying this is where Kree Empire will fulfil its destiny.

Unstable molecule: Reed tells the team to attack Ronan, “just as we practiced.” We never see this practice, but it’s clear that they’re taking on Ronan with a plan in mind.

Fade out: Yes, Sue is an Avenger. She and Reed officially joined that team back in Avengers #200, only to leave the team three issues later due to a change in editorial.

Clobberin’ time: Firestar says Ben is one of her childhood heroes, but she still can’t help him. Ben considers contacting Carol Danvers for help as well, only to learn she recently left the Avengers (in Avengers vol. 3 issue #5) and left for parts unknown.

Flame on: Caledonia says she’s sticking around because she owes a debt to Johnny, which Johnny says sounds a little too much like a commitment. When Ben jokingly calls Caledonia Johnny’s girlfriend, Johnny says they’re just friends.

Four and a half: With everyone having disturbing dreams, Franklin reminds everyone that he used to have dream-based powers, including prophetic dreams. This is of course a reference to his time spent as a member of Power Pack.

Sue-per spy: The 2019 Invisible Woman miniseries revealed that Sue had a double life as a S.H.I.E.L.D. agent the whole time. We can only speculate whether she lost (and later regained) her secret agent status along with her Avengers status.

Commercial break: Disney’s marketing department kinda phoned this one in, didn’t they?

Trivia time: Instead of telling readers when the FF first met Ronan, a caption invites readers to write in if they know the answer. I know – it was Fantastic Four #64-65. Now everybody send a postcard to Marvel and tell them.

This is the first time Firestar meets the FF. A mutant, Firestar was originally caught up in conflict between the X-Men and the Hellions. She then joined the New Warriors, for which she is probably most well-known. Then came her time with the Avengers. During Marvel’s Civil War event, she gave up super-heroing. She came out of retirement to be a mentor for the Young Allies, and she taught at the Jean Grey School. In current continuity, she’s been a player in House of X/Powers of X crossover and the Absolute Carnage crossover.

Also present in this issue is police sergeant Charlotte Jones, a supporting character from X-Factor. It looks like Ronan kills her, but we’ll see her still kicking in upcoming issues.

The three Kree prisoners are members of the “Lunatic Legion,” a group of Kree who often showed up as villains in Avengers and Iron Man during the 90s.

Fantastic or frightful? After the plot-heavy Genosha story, it’s nice to have an issue with more character stuff. I liked all four members of the team investigating the mystery each in their own way. Ronan continues to be a one-note baddie, but this helps the issue feel like classic Fantastic Four.