Reading the Fantastic Four comics from the start. Here’s vol. 3 issue #23, and the big story continues to be teenage Valeria now being a main character. Is the time-displaced girl hijacking the comic or is her presence an intriguing mystery. Also, Comic Con! 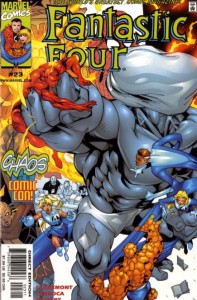 We begin in a courtroom in San Diego, where Reed is on trial, facing charges of rioting, reckless endangerment, and aggravated assault and battery. Attorneys Matt Murdock and Jeryn Hogarth are defending him, and the Avengers are in attendance. Rather than the usual legal process, the judge lets Reed have the floor to explain what happened, due to strange circumstances. Then we flash back to the Avengers and the FF fighting each other at the San Diego Comic Con.

Then we flash back even farther, to catch up where we left things last issue, with Reed curing Ben, She-Hulk and Bounty (who is an interdimensional bounty hunter) from the nanotech that caused them to go on a rampage. Murdock and Hogarth are there to go over the criminal repercussions of being possessed by nanotech.

Nearby, we see Valeria’s bedroom. When she traveled from an alternate future to the present, her room came with her. Reed and Alysande Stuart (a.k.a. barbarian swordswoman Caledonia) discuss Valeria, with Reed saying her arriving in the present can’t be a coincidence. Alyssa is just now learning that Valeria comes from a future in which she is somehow the daughter of Sue and Dr. Doom. Alysande wonders if Valeria is some sort of Trojan horse, and can’t be trusted. Reed wonders is she is a figment of Franklin’s imagination, just as the entire Heroes Reborn universe was. 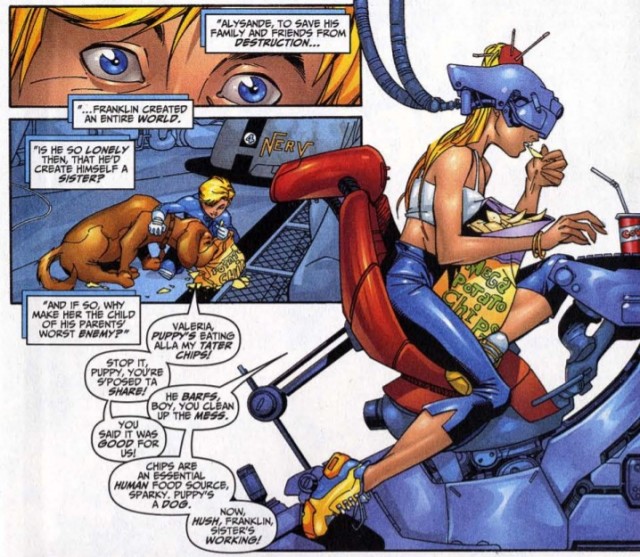 As for Valeria herself, she and Franklin are in Reed’s lab, where she is using her science genius to try to find a cure for Ben, She-Hulk, and Bounty. This is apparently part of the pier that is underwater, because there’s a strange bit where Franklin sees Namorita swim by outside, and Namorita’s outfit changes for a brief moment. Reed says he trusts Valeria to babysit Franklin, and he is impressed by a device she has been tinkering with, saying it looks familiar. Franklin looks through a cosmic telescope of sorts, and sees a huge storm way 0ut in space, heading for Earth. Reed says first they will rescue their friends, and then get to work on saving the world. 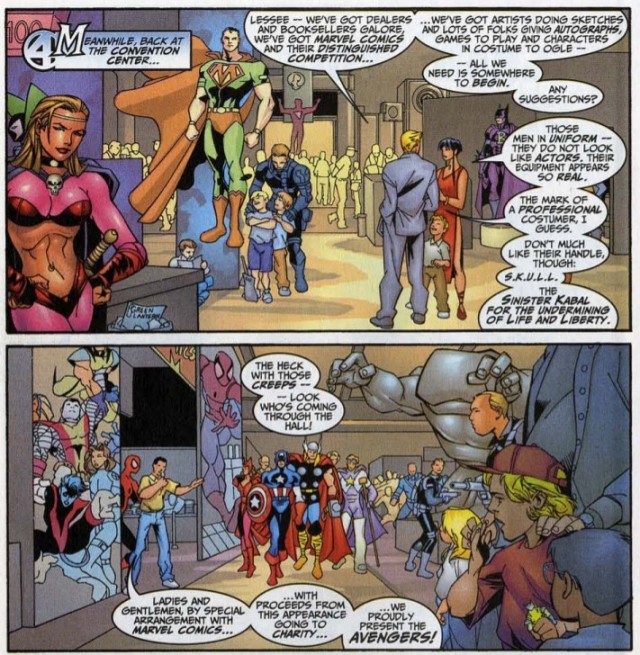 Cut to later, when Johnny, Franklin, and Alysande arrive in San Diego to attend Comic Con. Their presence at the con is only a distraction, however, while the rest of the FF are pulling off a Mission Impossible-style secret mission, breaking into the nearby Miramar Naval Air Station. At a secret lab deep within the base, they find the nanotech, which attacks Valeria. She instinctively uses her force fields to drive them off, and Puppy (Franklin’s teleporting alien dog) transports them out of there.

At Comic Con, Johnny, Franklin, and Alysande run into the Avengers, who doing an appearance at the con as a charity fundraise. A group of armed men called S.K.U.L.L., which is Sinister Kabal for the Undermining of Life and Liberty, attack the Avengers with the same nanotech. Also, a replica of the Mad Thinker’s Awesome Android is not a replica but the real thing, and it attacks as well. Johnny and Wonder Man, who is immune to the nanotech, fight back, and they’re then joined by Reed, Sue and Valeria. 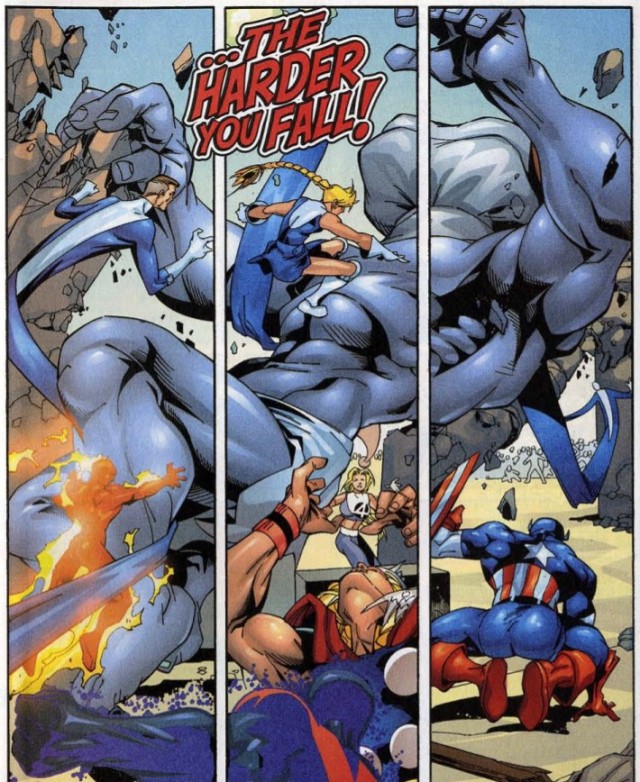 Using the knowledge gained from the navy base, Reed fires off an electromagnetic pulse which kills off the nanotech without hurting the Avengers. Sue and Valeria then combine their powers to send the Awesome Android flying out of the con and all the out to the ocean, where it lands next to an aircraft carrier. On board the carrier, we see the Red Skull and the Mad Thinker, working together. They’re the ones who’ve orchestrated the whole nanotech thing. Further, the aircraft carrier is really a S.H.I.E.L.D. helicarrier in disguise. It’s filled with weapons, and the Red Skull, the Mad Thinker, and the Awesome Android take up into the sky, where it disappears. 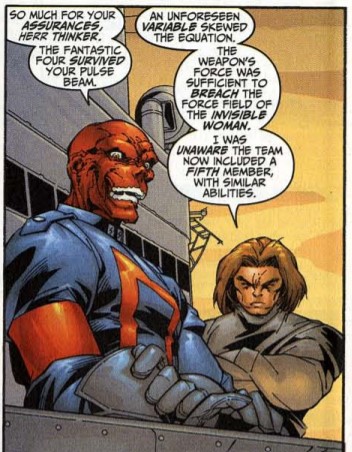 Then we catch up to the courtroom scene. The judge says he will drop all charges against the FF as long as Reed promises to track down the Red Skull before he can use all his new stolen weapons. Reed agrees, but he thinks to himself that the storm in outer space represents an even greater danger.

Wait, there’s more! We’ve got an 8-page “insert story” in the middle of the issue, Spider-Man: Fast Lane, part 1 of 4. This is say-no-to-drugs story, specifically targeting marijuana. Spider-Man acts as a bodyguard of sorts to Daily Bugle intern Sam, who emulates a pro-marijuana Hollywood celebrity Zane Whelan. Spidey jumps to the rescue when Mysterio attacks Whelan. The story was continued in Spider-Woman issues 7, 9, and 11, where Spider-Man stopped Mysterio, but not after Sam ended up in the hospital after driving while high. When Zane Whelan learns of this, he changes his ways and cleans up his act. 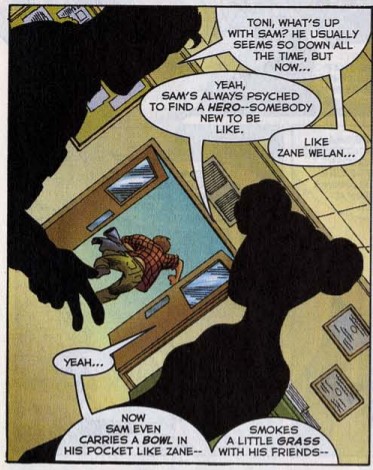 Unstable molecule: While Valeria now calls Sue “Mom,” she’s only referring to Reed as “Mr. F” in this issue. This is because she believes Dr. Doom is her father. Either that or she’s a big Arrested Development fan.

Fade out: But then, despite having accepted Valeria as a member of the family last issue, Sue now dislikes Valeria calling her “Mom.” Valeria keeps doing so anyway.

Clobberin’ time: Ben appears in the background during the courtroom scenes, revealing that he was cured of the nanotech.

Flame on: During the fight, Firestar grabs hold of Johnny, and he has to power down his flame so he doesn’t burn her. This might seem odd because she too had fire-based powers, but remember that her powers are actually based on microwaves. She can create and manipulate microwave energy to start fires, but she doesn’t control fire the way Johnny does.

Fantastic fifth wheel: She-Hulk is also in the courtroom scene, so she was cured as well.

Four and a half: Despite ongoing concerns about Franklni’s powers, everybody goes ahead and includes him in the mission, which seems like it should be a bigger deal. Once the action starts, though, his only move is to follow Alysande as she leads him to safety.

Our gal Val: Valeria’s bedroom gives us a glimpse of some of her interests. She’s something of a gamer, with posters of Tomb Raider, Legend of Zelda and Crash Bandicoot. She also has space shuttle posters, a Star Wars DVD, some field hockey gear, and we’re told she loves sailing. Most curiously, there’s a photo of her palling around with her buddies in the alternate future, Spider-Man and new character Rosetta Stone.

The Comic Con scenes feature just-different-enough-to-not-get-sued analogues of Batman, Superman, and (I think) Vampirella, alongside straight-up cameos of Spawn and Phony Bone.

SUE-per spy: The 2019 Invisible Girl miniseries revealed that Sue has had a double life as a S.H.I.E.L.D. agent all this time. In this issue, Sue takes a leadership role in the heist. Is this because she’s done this type of thing before in her spy career? 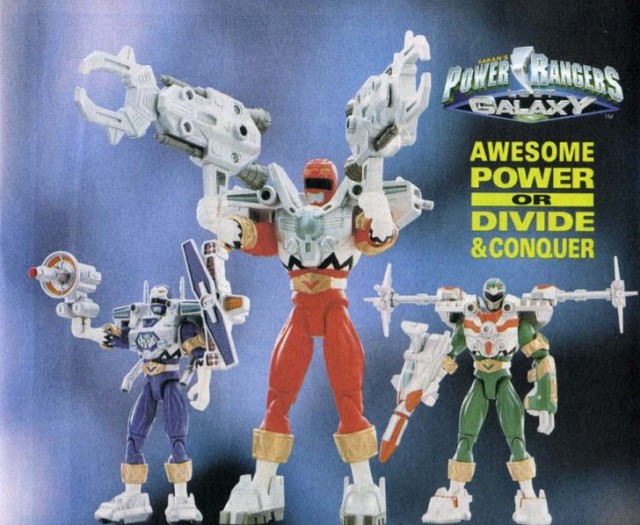 Trivia time: Unlike what we all saw in the Netflix Marvel shows, Hogarth is a man in the original comics. He was a regular supporting character all throughout Iron Fist, Power Man and Iron Fist, and Heroes for Hire.

The Red Skull’s appearances after this issue were sporadic, so I cannot figure out where this plotline about his stolen weapons went.

Yes, that is writer Chris Claremont and Salvador Larroca as themselves at Comic Con. Larroca is depicted as not able to speak English, but this would seem to be a joke based on the number of interviews I found about him online.

Fantastic or frightful? Again, this is a ton of story crammed into one issue. I really like the idea of the FF pulling off a heist, something we normally don’t see them do. But that’s only a few pages, because the issue also has Valeria’s mysterious origin, Comic Con, the Avengers, and two classic villains. There’s a lot to like here, but it’s a little exhausting. 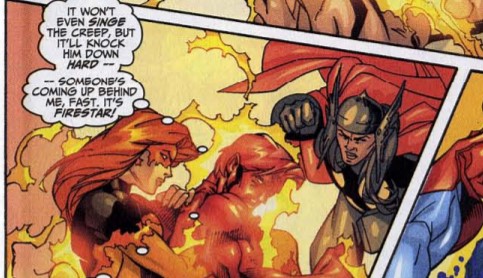 Next: The night before.