Fantastic Friday: She’s having a baby

Rereading the Fantastic Four comics from the start. It’s time for annual #6, which offers a major change in our heroes’ lives, as well as introducing one of the FF’s most vile villains. 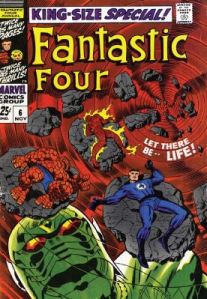 The story begins and Reed is pissed! We don’t know why he’s so angry, but Johnny and Ben are worried, because he should be at the hospital with Sue, as the baby is due to be born at any minute. Reed reveals that the radiation that gives them all their powers is endangering the baby. He believes that anti-matter from the Negative Zone could be the key to saving her. He wants to enter the Negative Zone alone, but Johnny and Ben insist on joining him. Reed’s whipped up some backpack-like harnesses for them to wear, to protect them from the anti-matter.

Inside the Negative Zone, a bunch of aliens are on the run from a big blue ship, which kills them all and destroys their world. A hatch opens on the ship, and out comes Annihilus, introduced in one caption as “He who annihilates,” and in another as “The living death that walks!” Why is Annihilus destroying planets? He states in a villain speech that by destroying life he is reborn.

Reed, Ben, and Johnny enter the Negative Zone and fly through the “distortion area,” which allows for all kinds of crazy pop-art visuals, including two pages of those wonky photo backgrounds. Reed is attacked by alien scavengers, who take him to into a hatch and remove his harness. Then we cut to the hospital, where Doctors tell Crystal that the radiation in Sue’s blood is going haywire, threatening her life, and the baby. 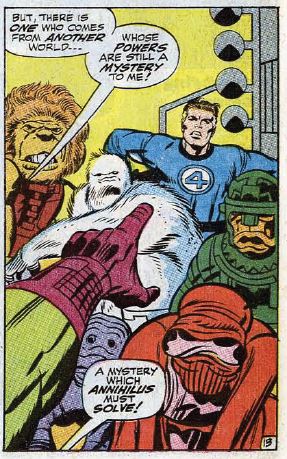 Ben and Johnny search for Reed, only to become trapped in a big globe and dragged underground, where they come face-to-face with Annihilus. He claims they are his specimens. He further explains that his cosmic control rod – the gold thing on his neck – grants him immortality, and that the only way to keep the rod is to ruthlessly slaughter anyone who might steal it from him before they get the chance. Reed is there, too, in a cage with a bunch of aliens. He somehow knows that the cosmic control rod is exactly what he needs to save Sue’s life. With a single blast, Annihilus kills all the aliens except for Reed, and locks Reed in another cage with Johnny and Ben. He’s spared the FF for his own amusement, and to learn how their powers work before he kills them. There’s several pages of fighting as Annihilus tests the FF’s powers with various death traps. Ben breaks out of the cage and knocks out Annihilus, after which Reed helps himself to the control rod. Similarly, our heroes then hotwire Annihilus’s rail-plane, using the vehicle to escape to the surface. 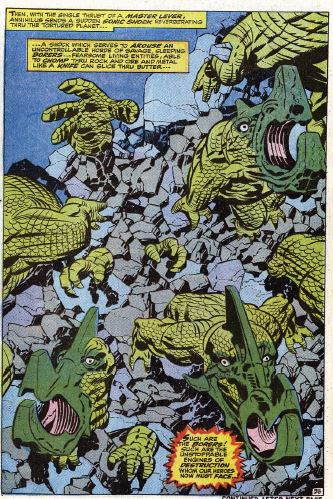 Annihilus wakes up and his furious. He throws a switch and summons creatures called borers. These are big lizard-like guys with hook-shaped mouths who come digging up out of the planet’s surface. After more pages of fighting, the borers threaten to overpower our heroes. Reed decides to use the cosmic control rod against them. It works, thanks to Reed controlling the rod’s power with his awesome brain. Just by concentrating, Reed drives back the monsters and levitates the three heroes back to the surface. Annihilus hops aboard a convenient gun ship to pursue the FF. Out in space now, he locates them and fires. Now flung through space, the chase is on, our heroes regroup on another planetoid with Annihilus still looking for them. If that wasn’t bad enough, their planetoid is being drawn toward a destructive anti-matter planet. Reed can’t use the control rod to escape again, because its energy is neutralized in this area.

Now things get really trippy. Reed surmises that if the planet is anti-matter, then it is made up of particles that are the opposite of Earth particles, and that if there is life on the planet, it is opposite of life on Earth. Therefore, if someone from Earth were to touch someone from the anti-matter planet, there would be a massive explosion that would destroy the entire world. Annihilus interrupts the science lesson and attacks. Back at the hospital, meanwhile, doctors are holding a press conference (!) saying that Sue might die if a cure is not found soon.

It seems that our heroes are at the end of the rope, with Annihilus hovering over them, demanding the control rod. Reed won’t give it up, wondering if it’s possible to drain energy from it. Annihilus decides to negotiate all of a sudden, saying the rod has a nozzle at the tip (wha-hey!) to drain the energy. Reed drains some of the energy into a vial he happens to have on him, and he gives the rod back to Annihilus in exchange for Annihilus returning their harnesses. They go their separate ways, with Reed promising to seal the Negative Zone permanently, so Annihilus can’t follow them to Earth.

The FF has a big hero moment as they triumphantly return to Earth. At the hospital, Reed, Johnny, and Ben are in the waiting room. The doctors have the cosmic rod’s energy, and the baby is due any minute. (Why isn’t Reed in there with her? Because it’s the ‘60s?) There’s a lot of comedy business in the waiting room with a Mr. Smith, another expectant father, who faints when he learns his wife has twins. Then the doctors and Crystal arrive with the good news – it’s a boy! Mom and baby are just fine. There’s much celebrating. Then, the annual ends with Reed holding his son in his arms and renewing the Fantastic Four’s promise to use their powers and skills to make the world a better place. 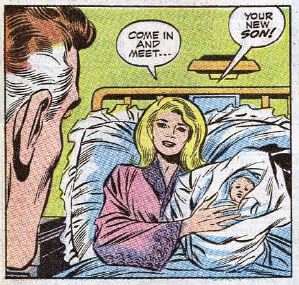 Unstable molecule: Reed’s kind of a space cadet in this story, which I guess we chalk up to him being the soon-to-be dad. I’ve no idea he knows the cosmic control rod can save Sue, and his multi-page reverie about the anti-matter planet is especially weird.

Fade out: Although her life is in danger throughout, Sue only appears on the last page. I’m afraid she’ll be on baby duty for a while, so we’re still a ways off from the “Sue is the team’s most powerful member” era.

Clobberin’ time: Ben manages to knock out Annihilus for a short time, the only real action our heroes manage to make against him. He also brings the fight to the borers in a big way, with Reed worrying that the battle will become “too personal” for him.

Flame on: Johnny doesn’t get as much action, and he’s on the verge of giving up as they’re being drawn toward the anti-matter planet, resigned to the fact that he’s about to die. Don’t be a quitter, Johnny.

Trivia time: It’s the first appearance of Franklin Richards, although we don’t learn his name yet. It’s also the first appearance of Annihilus, who’ll go on to be one of the staples of the FF’s rogues gallery. You could probably put him as fourth after Doom, Galactus, and Namor (if such rankings actually meant anything). Many fans believe that Franklin’s latent superpowers are actually drawing Annilihus toward the FF, but I don’t see anything in this issue to support.

Fantastic or frightful? I know this annual is famous because of the baby, but how awesome is Annihilus? We’ve seen a lot of villains in the comic up to this point, but most of them have been after power and conquest. This is first flat-out murderer they’ve fought, and that makes it really intense. Annihilus is a psycho killer given godlike powers, and he is really scary. As such, he’s always been one of my favorites. You could argue that all the fighting and the anti-matter planet stuff is filler to pad out the annual’s 48 pages, but it’s all hugely entertaining Jack Kirby action, so there you go.

Next: The wizarding world.