Rewatching the James Bond films chronologically. This is something I’ve wanted to do for a long time now. I love the Bond movies, but they all blur together in my head, so that I can never remember what happened in what movie. (The Madonna cameo was in You Only Live Twice, right?) The purpose of this series is not to regurgitate all the trivia, because that’s already out there. It’s to revisit the series with fresh new eyes. Oh, and for fun, of course.

Here’s how I’ll be breaking down each movie:

Bond background: What we learn about our heroic superspy.

Bond best brains: All about the gadgets.

Bond baggage: How each film represents the era it was made, intentionally or unintentionally.

Bond babble: What I thought of the movie, in the end.

With that out of the way, let’s kick things off with the blockbuster that started it all: Dr. No!

Bond blurb: Bond travels to Jamaica in search of a missing agent. The clues lead to the CIA, and from there to Dr. No’s hidden island fortress. Dr. No is threatening to disrupt the U.S. space program, on behalf of S.P.E.C.T.R.E., a group of the world’s greatest criminal minds. Dr. No captures Bond, but Bond escapes and fights the villain right over a nuclear reactor. 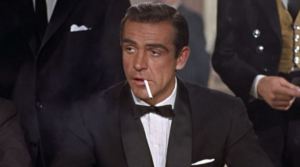 Bond background: Our intro to Bond is him at a poker game, tuxedoed, making the moves on a pretty lady – in his element. The theme music accompanies his famous “Bond, James Bond” immediately creating a movie icon. Later, when the bad guys try to kill Bond with a tarantula, Bond doesn’t just smash the thing with his shoe, he goes nuts and bashes it a bunch of times, revealing the stress of always being in danger and having to watch his back. 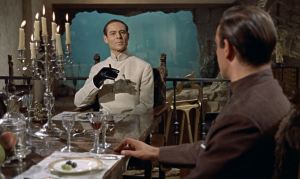 Bond baddies: Dr. No is built up a lot before we see him, including an incredibly spooky scene where he bosses around an underling with just his disembodied voice. When we finally meet him, he’s one sneaky, creepy dude. He comes across as always one step ahead of Bond – no small feat.

Bond babes: Honey Ryder is often credited as the first Bond girl, thanks to the memorable image of her marching onto the beach in that bikini (you know the one). But the distinction really belongs to Sylvia Trench, who woos Bond at the start of the movie. She breaks into his place to seduce him. It’s a cute scene, but it also humanizes Bond, showing a pretty lady can sometimes get the better of the cool superspy. Bond also beds a character named Miss Taro, but that was all an act, for the good of the mission (insert chauvinism rant here).

Bond best brains: The Walther PPK gets a big intro, with everyone at MI6 singing its praises before it’s handed to Bond. If I didn’t know better, I’d swear this was a prequel, with the filmmakers saying, “This is where his famous gun came from!”

Bond bash-ups: Fight scenes are short, because nobody in moviedom can throw a punch quite like Connery. A car chase uses hokey rear projection, but it ends with a great stunt as a flaming car rolls down a cliff. There’s a lot of talk about a “dragon” scaring the locals, only for it to be a huge tank with flamethrowers, which is incredibly awesome. 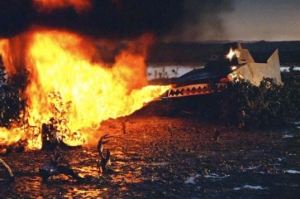 Bond baggage: The opening credits sequence is pretty much the 1960s in microcosm, half-mod and half-psychedelic. Plot points about radiation and the space race further show that the ‘60s were in full swing.

Bond babble: It’s fascinating how so much of what we think of as a Bond movie is present in this one. It’s really a “movie that changed everything” movie. It’s also interesting how it starts out relatively realistic, only to get more and more “sci-fi” as it goes along. It slowly eases the audience into over-the-top spy movie stuff, rather than throwing it all up there at once, which is admirable. The first really is one of the best.