Rewatching 21 Jump Street! Hope you like formal wear, because you’ll be seeing a lot of it in season three, episode twelve, “The Dreaded Return of Russell Buckins.”

What’s goin’ down: Hanson’s troublemaking pal Russell Buckins has become a journalist, publishing a tell-all article about the Jump Street program. Hanson is put on suspension for blabbing about undercover work to someone he thought was his friend.

Here’s Hanson: Hanson road-trips to San Francisco to confront Buckins. There, he blunders his way into a politician’s wedding, where everyone mistakenly believes he’s a guy named Robert. Buckins has also crashed the wedding to expose the politician’s corruption — and to find love.

Undercover blues: Both Hanson and Buckins flirt big-time with Louise, an heiress worth millions. When Buckins reveals Louise and Hanson’s newfound love to Hanson’s girlfriend, Jackie the D.A., it’s over between them.

The extras in the background of this scene just walk around like nothing’s happening.

Torn from today’s headlines: Tons of references here to tabloid journalism, as this was the height of popularity for The National Enquirer and its brand of celebrity scandal “news.” 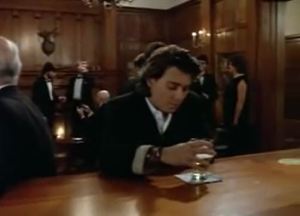 Trivia time: When we met Buckins last season in “Fear and Loathing with Russell Buckins,” it was established that Buckins is a magazine writer. That’s some nice foreshadowing right there. Hanson’s love of bowling gets yet another mention, where he convinces the snooty rich folks to leave their fancy croquet party and join him at the lanes.

Jumpin’ or not? When we last met Buckins, he was bringing Hanson out of his shell, but in this one, Hanson is the tough guy, not taking any crap from his old pal. This nicely shows Hanson’s ongoing development from “nice guy” to “bad boy.” Beyond that, though, we spend the whole episode doing the “rich family’s tensions come to a head while at a wedding” thing, and it’s a chore to get through. Is this 21 Jump Street or Dynasty? Not jumpin’.

Next: A private matter.