Reading the Fantastic Four comics from the start. Issue #328 more or less kicks off writer Steve Englehart’s final arc on the series, for better or worse.

As we begin, the FF have been defeated by the combined might of the new Frightful Four and Aron the Watcher. Aron, with Dragon Man as his sidekick, has been following the Fantastic Four in secret for a long time now. Reed, Sue, Johnny, and Sharon Ventura are unconscious in the Frightful Four’s hideout, with a now-human Ben back at FF HQ. The Wizard wants to kill the FF, but Aron says he has other plans. He also takes a page to remind everyone that he’s a bad guy because he broke the Watchers’ oath only to watch and never interfere. Their disagreement becomes a full-on villain brawl. The Frightful Four — Wizard, Titania, Klaw, and Hydro-Man — appear to win at first, until Aron knocks them out with a snap of fingers. Aron takes skin samples from Reed and Sue, which is all he wanted, and then he teleports out of there.

Later, Ben arrives at Frightful Four’s hideout on an FF sky-cycle (at least, the Marvel Wiki identifies it the sky-cycle) and talks to the NYPD at the scene. The cops report that Dragon Man was seen carrying a bunch of bodies away. Ben goes back to HQ and contacts She-Hulk, asking her about when she recently fought Dragon-Man. She says he was spotted around the Empire State Building.

Ben then fights his way into the Wizard’s hideout inside the building, where the Wizard has the FF hooked up to some machine. Without powers, Ben relies on his old-school hand-to-hand combat training and manages to hold his own against the Frightful Four long enough to free his teammates. The FF make short work of the Frightful Four this time, combining their powers to defeat the villains quickly.

Just as it looks like it’s all over, both the FF and the bad guys are teleported to another dimension, where Aron is waiting for them. He says he has to hide out in this other dimension so the other Watchers can’t see what he’s up to. He then reveals why he’s been stealing skin samples from the FF. He introduces his own re-creations of the FF, which he calls his “pawns.” 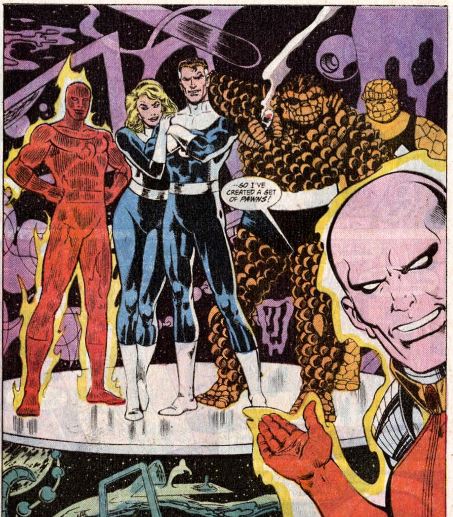 Unstable molecule: Reed defeats Titania by stretching himself into the shape of a big slingshot and flinging her into a wall.

Fade out: Sue traps Hydro-Man inside a Hydro-Man shaped force field, so that he cannot turn into water. This allows Sharon to knock him out.

Clobberin’ time: The cops don’t question Ben’s authority as a member of the FF, because they recognize him “from way back.” I wonder what the story is there.

Flame on: Johnny removes Klaw’s sound gun, saying that even though Klaw’s body is made of pure sound, Klaw is still harmless with his weaponry.

Fantastic fifth wheel: Ben suggests to Sharon that she could become human again, but she insists once again that her Thing body is who she was meant to be.

She-Hulk comments about a “guy named Byrne” following her around. This is a reference to John Byrne returning to Marvel to write and draw the comedy She-Hulk comic, famous for its breaking-the-fourth-wall gags.

The Alicia problem: The mind control stuff inside the Empire State Building has no effect on Alicia, who is secretly Lyja the Skrull in disguise. We’re told this is because she is blind (Lyja is actually wearing contact lenses to simulate blindness), but perhaps it’s because, as a shape-changer, Lyja is able to “see” beyond outward appearances. 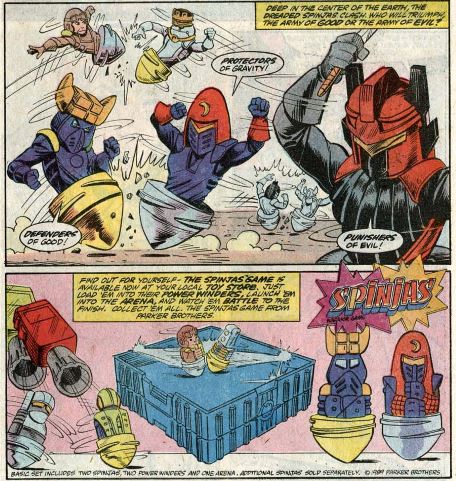 Trivia time: Not surprisingly, the Empire State Building is often a hotbed of activity in the Marvel Universe. Some highlights: We just had the Inferno crossover, where the X-Men fought demons there. The X-Men’s enemies the Fenris twins had an office in the building, as did Gabriel the Devil-Hunter (on the 13th floor, naturally). The Avengers, the Hulk and even Power Pack have battled multiple enemies there. Way back in the 1940s, the building was the site of an epic fight between the Sub-Mariner and the original android Human Torch.

Fantastic or frightful? A frustrating issue, in how little of it makes sense. Why does Aron leave the FF with the Frightful Four after defeating them? Why does the Frightful Four have to have two hideouts? Where did all this mind control stuff come from? The heart of the story is Ben proving himself even without his powers. That’s good, but everything around it is baffling. And it’s only going to get worse.