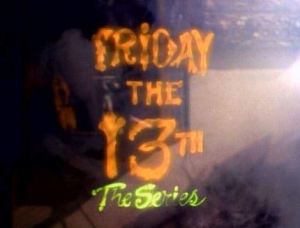 In episode seven, we’re going back to the franchise’s slasher movie roots, with “Doctor Jack.”

Someone is killing people in the city streets with a scalpel that can cut through brick and steel as well as it slices people. Micki, Ryan and Jack track the scalpel to Dr. Howlett, a renowned surgeon, who can miraculously save lives on the operating table. The more people he kills in back alleys, the more skilled he becomes as a surgeon. Also, the scalpel is rumored to have once been owned by Jack the Ripper, so there’s that.

The doctor will see you now.

Micki, Ryan and Jack not-very-convincingly pose as hospital staff in an attempt to snatch the scalpel back. After chasing Howlett through the tunnels beneath the hospital (hospitals in movies and TV always have these spooky tunnels), Jack ends up seriously injured, and only Howlett’s skill can save him. Howlett saves Jack to make himself look good, promising to “take care of” Jack later. It ends with another mad chase through those tunnels, with Howlett cutting through doors to get at Micki and Ryan. Micki flat-out kills Howlett by electrocuting him, forcing him to fall on his own scalpel.

I’m hugely distracted, trying to figure out what that graffiti in the background is saying.

When the show is smart: For those of you who miss Jason Voorhees, this episode is all slasher movie goodness. The scalpel being able to cut through anything makes for a fun complication, as the show comes up with creative ways for the killer to use the environment against his victims.

When the show is cheesy: A subplot has to do with Howlett’s surgery prowess getting good press for the hospital, leading to a bunch of reporters observing the surgery in progress. Not only do a doubt a hospital would do this, but the reporters don’t have cameras or notebooks, they’re just sitting there watching.

Devilish dialogue: Ryan: “Me and my folks, we never got along. They always treated me like I had a screw loose. They never let me do anything important. Jack, he was the first one to act like I had something on the ball.”

– Did the real Jack the Ripper use a scalpel? As with any JTR question, the answer is “maybe.” Most sources, though, stick with the belief that the Ripper’s murder weapon was likely a knife with a six-to-eight-inch blade.

Back in the vault: A really fun episode, combining a memorable villain, a moral dilemma for our heroes, and some over-the-top B-horror cheese.